I’m in a sad room with pale cubicles and fluorescent lights sucking the color out of the room, about to complete the GRE General exam.

You have the choice to accept or decline your scores. If you click “accept”, they will stay in your exam history and will be visible to the schools you wish to send them to. If you decline, they will be deleted, unable to be recovered.

I see my score.

I grab the computer monitor and rip it out of the desk, pulling and ripping out its power cords and cables. I yell all of my frustrations, letting out the loudest Fuck You my lungs can let out. That is what plays out in my head. I get up and quietly leave the room. There are other people in this room, also taking exams, and I don’t wish to disturb them.

This was me a couple of weeks ago, walking out of the testing center, the way someone walks away from a train wreck. In the last few months (essentially since starting the blog), I’ve been preparing to apply to PhD programs. That includes preparing for this exam, studying vocabulary and taking various practice exams, in order to improve my scores. This time around, I didn’t just do poorly- it was one of the worst scores I’ve ever received. I didn’t understand- I studied for weeks, and have scored much better in the past. How is this possible? In my entire grad studies career, this exam has always been my Achilles heel. I’m an excellent researcher, my work has won awards, I’ve tackled every possible problem grad school threw at me and did really well in the end. But this- it’s always been a struggle. This time, it was so bad, it made me ask a lot of serious questions. How can I apply when I’ve only scored worse? What does this mean about me as a grad student? Am I even qualified for doctoral studies? What are my chances now that my scores have only gotten worse? I left the center, barely able to walk, in a haze of bewilderment. What now? What’s going to happen? Why apply? And then, I did something drastic.

I decided not to apply to doctoral programs.

What’s the point? I’m in no better position than I was last year. I know I’m not going to get in, and there are a ton of better things to spend the money I saved up for application fees on, like booze or paying my phone bill. It didn’t make sense to apply. So I chose not to. That was the last thing I told myself that night.

The next morning, I felt a huge void in my core. Something was gone. I got out of bed, got dressed, and went to work, but the whole time, it felt like my body was swapped out for a dummy, mechanically fulfilling my objectives for the day. I was barely lucid, often getting caught staring into nothing. My drive, the thing that got me out of bed, was gone; it didn’t cease to exist, but rather, it was taken from me. This…thing, applying to programs- it was all I knew, and now, it was no longer part of my being.

The next week, since I wasn’t working on applications or doing research, I had a lot of time to myself. I then picked up a really strange habit- on the way home from work, I’d stop by the movie theater and watch whatever was playing. I wasn’t even really interested in watching any of these films- it was just some thing I started doing. Movies did a great job helping me forget that outside of this screen-lit room, there was a world I chose not to participate in, and Time was now a drug that helped assuage the will and work I intended on putting into my applications. This went on for a couple of weeks. I saw a lot of movies.

The last time I was in a rut like this was during my first semester of working as an Adjunct Professor at my alma mater. I like teaching, and technically, this was my dream job, however I started to realize what exactly an adjunct was, and how it differed from my idealized version of it. It was a massive amount of work with horrible pay, leaving me no time to even think about applying to PhD programs. I slowly started to resent it, without understanding that there was another issue grinding away what I really cared about. I then picked up a really strange habit- on the way home from work, I’d stop by the movie theater and watch whatever was playing. I wasn’t even really interested in watching any of these films- it was just some thing I started doing. It took me a while to understand what the real issue was- I wasn’t pursuing my research. My research was something I was really passionate about, attempting to live a life devoted to this work. I slowly started to realize how much it meant to keep pursuing this. I finished the semester without applying. All I had was going to movie theaters. This went on for a couple of weeks. I saw a lot of movies.

I remember the days when I worked as a mechanic, waking up every day, doing the same thing, over and over. It was Sisyphean, pushing the same rock over the same mountain, seeing it roll down the same path. Part of the reason why I quit that job in pursuit of writing was to help break this endless routine, hoping to find a creative outlet. And it worked! I really enjoyed staying endless hours in a library, expanding my intellectual horizons, constantly asking questions; the big questions that everyone subconsciously wants to know. After almost ten years of this pursuit, even this was becoming repetitive. I found an area I was interested in, then stayed there, and soon that was all I knew. The parallels to a normal work week was undeniable. It was just a different boulder. But then I came across one of the most influential essays of my academic career- The Myth of Sisyphus by Albert Camus. He writes, “One always finds one’s burden again. But Sisyphus teaches the higher fidelity that negates the gods and raises rocks. He too concludes that all is well. This universe henceforth without a master seems to him neither sterile nor futile. Each atom of that stone, each mineral flake of that night-filled mountain, in itself, forms a world. The struggle itself toward the heights is enough to fill a man’s heart.” As I tried to find a new life, carving out a new frontier, it soon became inevitable for it to mimic my old life, the only one I knew before. What made them different was its liberation of my consciousness, and this new life was where I found intellectual solace. Continuing my research is in my bones, and I must pursue, not for future’s sake, but for mine and mine only. One must imagine Rolando happy.

Flash-forward from then to two weeks ago: I’m waiting for the train, thinking about what the next few years are going to look like. Will I ever apply again? Maybe that’s not so terrible- I have a good job, I still do my own research, though it’s mostly on my own, and my students like my teaching. Why change anything? But I still couldn’t shake that void. I had to continue to do something. But what? There’s more and more reasons why I shouldn’t apply, so that means I shouldn’t…right?

That week, a friend of mine invited me to Friendsgiving. It was him, his wife, sister-in-law, and a few of his coworkers. Before I continue, some context is necessary: you know that story about me being a mechanic then ? This guy, I’ve been friends with since high school, and we were in the same automotive technology program. 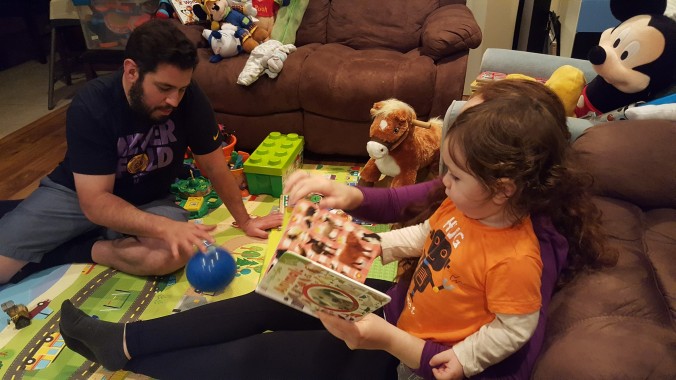 In fact, he’s still a mechanic, and we’ve kept in touch with each other since. That night, as the night wound down, he, his wife, and I were playing with his 6 month old son. I was the cool uncle to him. He came up with a nickname for me- Lalu (sure, why not 🙂 ). He even started learning from me- every time he stood up, he toasted our wine glasses with a potato chip (they’re still questioning whether learning from me is a good thing). But as I saw them, I couldn’t help but ask, If I stuck to my original career choices, would this be my life? Would I be surrounded by toys for a child instead of rows of books? Then I remember Camus’ quote- this is his rock. He is pushing it up the road his rock has trudged, and if the rock falls back down, it is up to him to decide to push the rock back up. What matters is that he is a good man with a loving family, and whether or not he wishes to unveil the secrets of the universe or not will not undermine these facts.

Right before I took my exam, I did some last minute studying reviewing vocab words in my 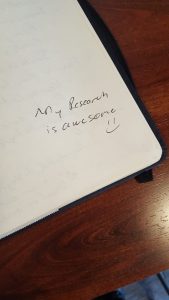 notebook. As I was trying to find the right page, I came across this quote. My past-self wrote this in hopes that I’d find it when I really needed it. As I write this post, I think about what exactly this means. Religious scholar Reza Aslan once said, “If you focus too narrowly on a single path to God, all you will ever find is the path.” What I took from this was that because I have been focusing on this route of pursuing a doctoral degree so much, I have been blind to any other applications for my research. Maybe this can be a chance to branch out and try something new, no longer being beholden to this one avenue, applying my research to new areas of study. I’m applying next year, working on whatever it is I need to improve for this second round, but it doesn’t only have to be that. A friend of mine recently told me about a program at UCLA called Library Sciences (learn more about it here). Based on what I’m interested in, this could really turn into something new. It might even put me in a whole new field, working in a completely new industry, like publishing, archival work, community service, or even tech. Also, this experience, writing this blog, really made me appreciate what being “a writer” is- maybe that can help lay the tracks to something new. This decision is no longer a burying of opportunity, but a burgeoning of one, and I’m really looking forward to seeing where this will take me.

OH! I almost forgot- so what exactly does Seeking Infinite Jest mean? Well, I’ll put it this way:

Alas, poor Yorick! I knew him, Horatio: a fellow
of infinite jest, of most excellent fancy: he hath
borne me on his back a thousand times; and now, how
abhorred in my imagination it is! My gorge rims at
it. Here hung those lips that I have kissed I know
not how oft. Where be your gibes now? your
gambols? your songs? your flashes of merriment,
that were wont to set the table on a roar?

I don’t know, young troubled Hamlet, but now I have another year to find them.

Follow Seeking Infinite Jest: My Road to the PhD on WordPress.com